Etheldreda (other versions of her name include Aethythryth and Audrey) was born around 636, one of the daughters of King Anna of East Anglia. She and her family were devout Christians, living in uncertain times when wars between Christian and pagan kingdoms in England was commonplace.

She was married twice for political purposes. Her first husband was Tondbert, a local chieftain. After his death, she married Egfrith, who became King of Northumbria. As Queen, she gave land to build Hexham Abbey.

According to the Venerable Bede, who wrote about Etheldreda’s life, she remained a virgin throughout both marriages. At that time, chastity was a sign of true devotion to the Christian faith. Eventually Etheldreda achieved her wish to be released from her marriage vows and become a nun. In 673 she returned to Ely, where she owned land, and founded a double monastery for monks and nuns.

As Abbess of Ely, she was known for her piety, wisdom and learning.She was the daughter of Anna, king of East Anglia, and was born, probably, at Exning, near Newmarket in Suffolk. At an early age she was married (c.652) to Tondberht, ealdorman of the South Gyrwas, but she remained a virgin. On his death, c.655, she retired to the Isle of Ely, her dowry.

In 660, for political reasons, she was married to Egfrith, the young king of Northumbria who was then only 15 years old, and several years younger than her. He agreed that she should remain a virgin, as in her previous marriage, but 12 years later he wished their marital relationship to be normal. Etheldreda, advised and aided by Wilfred, bishop of Northumbria, refused. Egfrith offered bribes in vain. Etheldreda left him and became a nun at Coldingham under her aunt Ebbe (672) and founded a double monastery at Ely in 673. (from FARMER, David: The Oxford Dictionary of Saints, 3rd ed. OUP, 1992.) 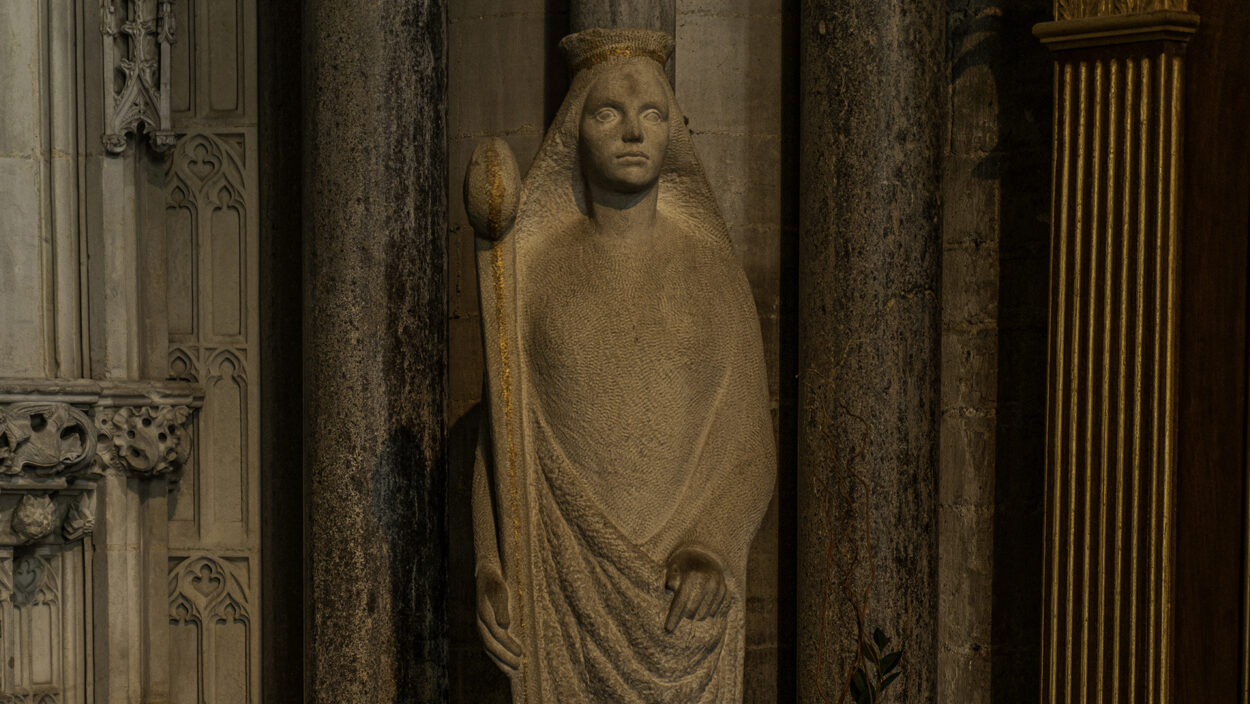 Etheldreda died c680. Some 16 years later, her body was taken from the simple grave she had requested, to be placed in a fine stone coffin in the Abbey Church. Her body was found to be ‘incorrupt’, without decay, believed to be a sign from God that she was a saint.

Her repute as a saint grew, and pilgrims came to Ely from near and far, seeking miracles from her relics, which were believed to have healing powers, especially for throat and neck diseases. She became one of the most well-known and popular early English saints. In medieval times, several churches across the country were dedicated to St Etheldreda, and images of her abounded.

Ely’s monastery was closed in 1539 at the Reformation, and Etheldreda’s shrine was destroyed shortly after. Interest in Etheldreda was rekindled in the 19th century, and a number of churches are still dedicated to her, including St Etheldreda’s in Ely Place, London (once the chapel of the London palace of the Bishops of Ely).

Today, St Etheldreda is still remembered on her feast days of 23rd June (her death) and 17th October (when her body was moved into the Abbey Church). A modern ledger stone marks the site of her shrine in the Presbytery, and some 14th century carvings of her life and miracles can still be found in the Octagon, rare survivals from medieval times. Her image, showing her with royal crown and her Abbess’ staff, features in a number of 19th century stained glass windows.

Some relics are alleged to be in St Etheldreda's Church, Ely Place, London (where the bishops of Ely formerly had their London residence). Her hand, which was discovered in a recusant hiding place near Arundel in 1811, is claimed by St Etheldreda's Roman Catholic church at Ely. The Story of Ely